Audiology is the branch of medicine that is concerned with hearing. SFENTA can help patients who are experiencing hearing loss at any stage.  Hearing loss is described by varying degrees, not percentages. Hearing loss may be mild, moderate, moderately severe, severe, or profound and vary across pitches. 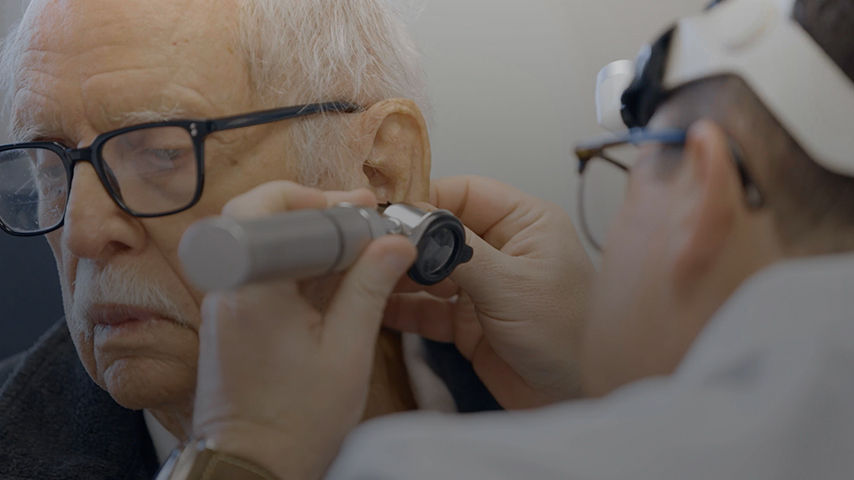 Your level of hearing loss will be determined by a simple hearing test. The test works to determine the amount of volume loss you experience. The volume or intensity of sounds you hear is measured in decibels (dB) — 0 dB being the softest whisper and 120 dB being a jet engine. The softest sounds one can hear are called “thresholds”. Normal hearing thresholds for adults are considered 0 to 25 dB. Contact our office today if you have begun to notice any changes in your hearing ability or would like to see an audiologist.

Our audiology services start with evaluation and testing and include numerous treatment options depending on the cause of your hearing loss. This includes surgical procedures, hearing aids, and cochlear implants.

Hearing aids are the most common form of treatment for hearing loss. Hearing aids have come a long way, and are now far more subtle and sleek. They are worn around or inside of the ears and can amplify the sounds you hear. They are designed so that the settings can be adjusted and easily transition from crowded rooms to intimate conversations. SFENTA offers the newest and most advanced hearing aid models, and we can help you select the best options.

Programming and Maintenance for Hearing Aids

Once you’ve received your hearing aids, you will need a specialist to program them and help you understand how they work. One of our audiologists will program your hearing aids and fine-tune the settings to your unique hearing ability. Our staff can also assist with maintaining your hearing aids to ensure you continue to get the most out of them.

Cochlear implants are a device that can help patients with more severe forms of hearing loss hear more clearly. The device is made up of a surgically-placed implant and is connected to an outer earpiece. This device stimulates the inner ear directly using electrical signals to help make sounds louder and help patients who have not had success with hearing aids.

SFENTA is composed of over 50 ENT specialists with expertise and experience in different areas of ENT care. When you visit us for your appointment, you will not only have access to highly skilled audiologists, but also to specialists in general ear care, surgery, and more. Our providers can also collaborate internally, leading to the best patient outcomes through comprehensive treatment.

The part of the outer ear that we see is called the “pinna” or “auricle”. With its grooves and ridges, the pinna provides a natural volume boost for sounds in the 2000 to 3000 Hz frequency range, where we perceive many consonant sounds of speech. The ear canal, also called the “external auditory meatus”, is the other important outer ear landmark. The ear canal is lined with only a few layers of skin and fine hair, and is a highly vascularized area. This means that there’s an abundant flow of blood to the ear canal. Wax (cerumen) accumulates in the ear canal and serves as a protective barrier to the skin from bacteria and moisture. Earwax is normal unless it completely blocks the ear canal.

The eardrum, or tympanic membrane (TM), divides the outer and middle ear. Although it’s an extremely thin membrane, the eardrum is made up of three layers to increase its strength. The ossicles are the three tiny bones of the middle ear located directly behind the tympanic membrane. These three bones form a connected chain in the middle ear. One of the bones is embedded in the innermost layer of the tympanic membrane, and the third bone is connected to a membranous window of the inner ear. The ossicles take mechanical vibrations received at the tympanic membrane into the inner ear. The Eustachian tube is the middle ear’s air pressure equalizing system. The middle ear is encased in bone and does not associate with outside air except through the Eustachian tube. This tubular structure is normally closed, but it can be involuntarily opened by swallowing, yawning, or chewing. It can also be intentionally opened to equalize pressure in the ears, such as when flying in an airplane. When this happens, you might hear a soft popping sound.

The inner ear is an organ located deep within the temporal bone, which is the bone of the skull on both sides of the head above the outer ear. The inner ear has two main structures: the semicircular canals and the cochlea.

Semicircular Canals: These structures do not contribute to hearing, but assist in maintaining balance as we move.
Cochlea: This is the hearing organ of the inner ear, which is a fluid-filled structure that looks like a snail. The cochlea changes the mechanical vibrations from the tympanic membrane and the ossicles into a sequence of electrical impulses. Sensory cells called “hair cells” bend in the cochlea as the fluid is disrupted by mechanical vibrations. This bending of the hair cells causes electrical signals to be sent to the brain by way of the auditory nerve. The cochlea is arranged by frequency — much like a piano — and encodes sounds from 20Hz (low pitch) to 20,000Hz (high pitch) in humans.

Conductive hearing loss occurs when there is a problem with the way sound is conducted to the inner ear or cochlea. The problem may lie in the outer ear (pinna or ear canal), eardrum (tympanic membrane), or the middle ear (ossicles and Eustachian tube). The inner ear remains unaffected in this type of hearing loss.

The hair cells may have been abnormal since birth (congenital), damaged as a result of genetics, infection, drugs, trauma or over-exposure to noise (late-onset or acquired), or damaged as a result of the aging process: a kind of hearing loss known as presbycusis. Sensorineural hearing losses are generally permanent, and may stay stable or worsen over time. Routine hearing tests are needed to monitor hearing loss. Amplification, including hearing aids or cochlear implants in the most severe cases, is a common treatment recommendation. Individuals with sensorineural hearing loss may report muffled speech, ringing in the ears (tinnitus), difficulty hearing in background noise, or may feel that others do not speak clearly.

Mixed hearing loss can sometimes be treated with medical management, and hearing aids in Miami are a common treatment recommendation.

With 2 convenient locations across the Orlando area, we’re never far away.

Find your ENT Request Appointment
Accessibility: If you are vision-impaired or have some other impairment covered by the Americans with Disabilities Act or a similar law, and you wish to discuss potential accommodations related to using this website, please contact our Accessibility Manager at .